Well, here is all the story of the Bahamas.

Getting there was a little frustrating. Our plane had mechanical problems, so after an hour on the runway, we were told we were getting off. We didn’t have any other information, and knew the rest of the flights that day were booked, so we were a little concerned. However, they drove us by bus (oh, these are prop-jets, with about 40-50 people/plane, so you take buses to the jets on the runway) to another plane. We got on, but then had another long wait to get luggage from the other plane to our plane. Plus, the stewardess thought she lost people, which she didn’t, but she had counted wrong in the first place and they couldn’t let us go until they figured out if everyone was there.

So, we arrived! We had to get our luggage and then go through customs. Kraft had arranged for private drivers to the resort. Our driver was a beautiful Bahama woman and she chatted with us the whole way. You have to drive through most of the island (it is only a few miles long) and Nassau, the port city where all the cruise ships come in, and the traffic is bad there. They drive on the left hand side of the road, although her car was built for right hand driving.

When we arrived at Atlantis, they had a coordinator who got us checked in and then the bell hop took us up to the room and “toured” the room for us (in case we couldn’t find the TV). I have no idea why people would actually ask for a bellhop in real life (you would tip him, and maybe there is a charge, I don’t know), but they must, cause there are plenty at this hotel. Atlantis is a huge complex with several different “hotels” within the resort. We were staying at close to the best one. This place, The “Cove” had two private pools from the rest of the complex. These are the view from our balcony: 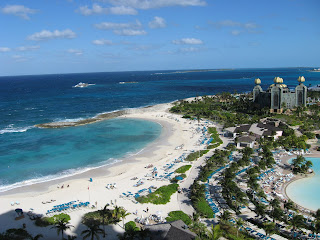 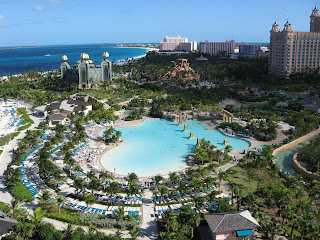 We were starving by now, because we had eaten at 6 a.m., and it was 4 p.m. We went in search of reasonably priced food, and not finding any, decided to eat anyways! We had soup and an appetizer at a bar, because the restaurants didn’t open until 5:30, and then had ice cream. We tried out the slot machines. Over the course of our stay, we were up as much as $50, but ended up losing $20. Pooh. It was fun, so I guess worth the 20 over the 4 days. We were so tired, we went to bed early.

The next day Barry had a morning meeting. I got up and wandered around, had breakfast, and then looked at all the marine exhibits. They have sharks pools and tropical fish areas and sting ray lagoons and turtle lagoons and a big dolphin area. 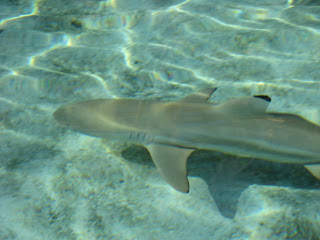 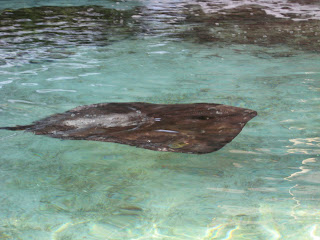 The casino has four blown glass sculptures by a man named Chiluly. You have seen a few of his pieces at the botanical garden we went to. Here are more: 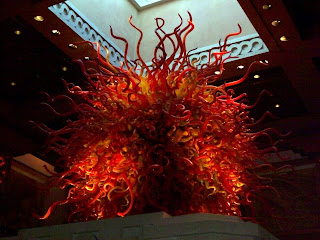 I was tired after walking around – it is really a big place. I then went back and sat on the balcony and read until Barry got out about 2 p.m. We went wandering down the beach, around the resort, had a slice of pizza, then back to the room to get ready for dinner out with Kraft.

It was an amazing dinner. We met in a small lounge for drinks and appetizers, then at 8 p.m. went to the restaurant. I had filet mignon, this great starter with shrimp and corn, and then a fancy dessert. They frequently serve fancy desserts in these restaurants on a long narrow plate. At one end of the plate was a small scoop of 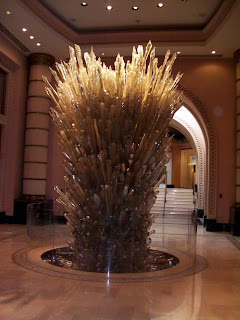 fruity gelato (ice creamish), in the center was a slice of apple (cooked and sugared somehow) and at the other end a small round cheesecake, but I don’t remember the flavor – fruity. It was good though.

The next morning (Thursday), Barry went running. When he got back, we went to breakfast and then decided to go to Nassau. Nassau is famous for its shopping – designer shops and jewelry from famous stores. There is a straw market where locals sell designer knock off’s of purses and jewelry, but these were poorly made so we didn’t get anything. The sellers are very pushy, but there are hundreds of separate vendors, so they have to be to get a sale. The jewelry and designer goods (real) were just as expensive as usual – I guess the lure is no sales tax? I don’t know, but we didn’t think it had been worth the trip, except that I got a diet coke for $1 instead of $4 at the resort (not kidding). We took the water taxi back to the resort which was fun.

At 3 p.m. we met in front of the Cove to take a bus to the pier. Kraft had a special event for us. We were taken out to two sailboats – the kind that participate in the America’s Cup. Really big. They were actually the prototypes for the boats – they build them, race them, fix them, alter them, try again, fix, alter, try again, until they get the speed they want. Then they build the final racing boat based on these completed models. Pictures: 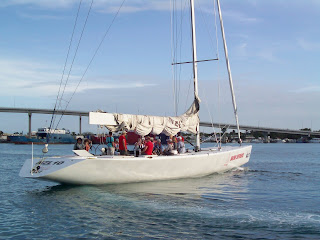 So, we split into two groups. Most of the pictures are of the other boat in the distance. They are too big to take pictures close up. You know how they are always pictured tilted? I thought they only tilted on turns, but they tilt all the time, and they tell you to sit on the high side – it’s the pull of the sails catching the wind. They gave us wine or champagne – now I had taken Bonine to not be seasick (good thing – HUGE waves, but doesn’t feel like it does on Kirk’s little boat – much more smooth up and down because of size of boat). They said you could drink, so I had wine, but I would say, in retrospect, DO NOT do this because I felt pretty sick the next morning, which could have been any combination between the wine, the Bonine, or the wavy, wavy ocean!!! 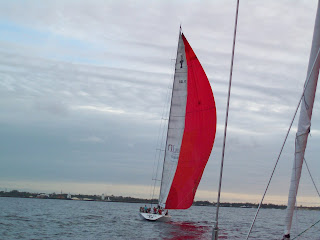 This was an incredible experience. It was so amazing. I looked at Barry and said, “did you ever think we would do something like this?” The sailors were mostly young, one older. They had so much to do. There are two sails – the main sail and the jib. Then, about halfway through, they hoisted the spinnaker, which is the big colored one that flares out and makes it pretty – it was red – I don’t think it does anything except look good. After an amazing sail in the ocean, we came to a calm area and the service boat shows up with appetizers – very nice – so we sat through the sunset eating and drinking and enjoying the ocean.

When we came back, some of the guests went to the “fish fry” where locals have shacks and some little bigger areas and cook up fish. Very plain but hearty. We chose not to go – went to find something small to eat, then wandered around then to bed early again.

Friday morning getting ready to depart. We went to the breakfast buffet because we knew we wouldn’t eat again until supper. The trip back was organized much as the trip in – but this time our flight was fine, luggage was there when we stepped out, and picked up Chris.

Ta Da! And THAT was our trip to the Bahamas.

Email ThisBlogThis!Share to TwitterShare to FacebookShare to Pinterest
Posted by Ann at 11:32 AM No comments: