I know the story is set in Sweden.

Obviously, I need to work harder.

In the blog post, Should I read Books 2 and 3, I shared my disappointment with the first Laarson novel, The Girl with The Dragon Tattoo. I thought the descriptions were flat and tedious. BUT, encouraged by a number of blog readers, I decided to finish out the trilogy, reading The Girl Who Played with Fire and The Girl Who Kicked the Hornet's Nest.

I enjoyed these books more than Dragon Tattoo. When I started Played with Fire, I almost quit and returned it unread to the library. In book two, Laarson again begins with didactic description of another journalistic investigation - after I had the jist, I started the skimming. I thought, "I'll be done with this book in an hour!"

Three hours later, I was exhausted from pushing myself to read...and had to stop to make dinner.

Once into the "action" scenes, Laarson uses his intriguing character, Lisbeth Salander, to lead the plot into fairly intriguing, if nearly implausible, situations. Oh, yes, he still bogs down the writing with unnecessary detail - for example, Lisbeth has to furnish her apartment. She goes shopping at IKEA. We get to read (if we don't SKIM, SKIM, SKIM) about EVERY STINKING item she buys at IKEA.

Since I have personally bought furniture at IKEA, and helped Amy furnish her apartment 100% IKEA, I was familiar with each item, even with their odd names (BESTÅ ÅDAL, MALM, EKTORP, KIVIK). Despite my ability to summon a vision of each piece...I did NOT need this much information.

Hornet's Nest is the best of the three books. The story occasionally stalls, but now accustomed to Laarson's writing style, I quickly pick these out and skim through. I enjoyed it - left with some confusion regarding the Swedish justice system and court practices (very casual and tangential), but happy with the triumphant conclusion and the way Laarson tied up all the story lines.

I will recommend these books to you - but only as a borrowed or library read, and with the caveat that if you feel bogged down in detail, remember to skim. You won't miss what you don't read, I promise.
Posted by Ann at 3:40 AM No comments:

As you read in "Swimming Cat update", I'm swimming and the cat was doing quite well with the new indoor-outdoor routine.

I was feeling a little smug.

My house didn't stink. The cat was calm. My bite wounds healed with only moderate scarring. All was good.

Tuesday about 3 a.m., Paco meowed to go out. I let him out and stumbled back to bed.

At 3:30 a.m., I heard barking, screeching and yowling, and I KNOW that yowl (many nights of pre-outdoor cat-begging to go out noise).

I shot out of bed and ran out front. Two dogs were attacking Paco, who lay unconscious on the grass while one dog dragged him away by the leg.

I yelled, the dogs scattered, and I scooped up Paco and brought him inside.

Paco regained his senses after a few minutes, but was having trouble swallowing and walking.

In the morning, we took him to the vet, where he stayed the night after his wounds were treated: 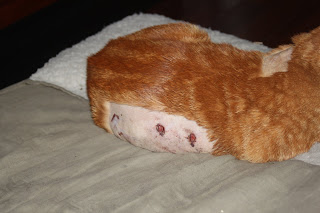 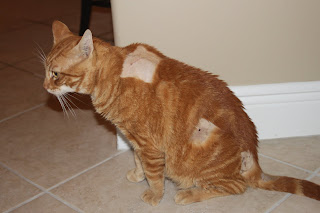 Tuesday evening, a neighbor from down the street came over with flyers.

Apparently a gang of three dogs has been terrorizing the neighborhood cats (large feral colony and many pets, out like Paco for a nightly roam). SIX cats had been killed. They had caught the dogs on video during one of the attacks.

Since only 15 minutes before, I visited the neighbors' house and accused THEIR dog of the attack, I was conflicted about this news. GREAT. There goes the neighbor-of-the-year award.

It's time for me to MOVE OUT of MIAMI (or be run out).

Paco is recovering nicely, thanks for asking. He moves slowly, but did sit on the porch (screened and locked) for about an hour this morning, eating and drinking well.

I guess I'm keeping him in from now on - what I will do when he returns to health and his bad behaviors, I do not know, because I feel guilty enough to take quite a bit of aggravation for a while.
Posted by Ann at 12:08 PM No comments:

I admit it - the headline is disingenuous.

Cute animal videos go viral all the time - you know you'd click the Youtube link to see a swimming cat.

The fact is, if we were as callous as those amateur videographers sometimes seem, we could have a video of a swimming cat.

Paco (our cat) likes to drink out of the swimming pool. He crouches on the edge, leans waaayyy over, and laps away. About four weeks ago, the pool level was lower than and he thought and ....splash! 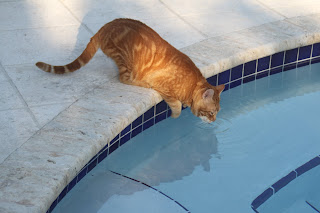 Chris was outside at the time, so immediately performed pet rescue without first reaching for his camera.

Good for you Christopher!

I hate to admit it, but wonder if I wouldn't have put off rescue for at least one cute (horrible) swimming cat photo.

The cat outside experiment has been working fairly well. Paco typically hangs out in the backyard area from 3 - 5 p.m., wanders until 8 p.m., comes home to sleep for a few hours, wants back out at 11 p.m., then comes home for breakfast and a longer sleep.

The other evening when he didn't come home at 8 p.m., I went out looking. I found him - being chased around the neighbor's house and then cat-fighting. He didn't have too many scratches, so I think the ninja acumen he demonstrated attacking me must be quite effective against the neighborhood feral cat colony.

My husband noticed less cats hanging in the area - he thinks Paco is dominating and they are slinking off to new grounds.

I think he's delusional - it's all about the time of day. At 5:30 a.m. (Miami heat is on, so if I want to run, gotta get up and get moving), 12 cats languished on my neighbor's lawn and driveway.

The neighbors are more philosophical about this than I - "At least we don't have rats anymore!"

Don't worry - as appealing as a RAT tangent might be, I'll stay on topic.

We went to the condo in Clearwater for spring break - nine days. Paco and Aiden (dog) accompanied us.

Paco was a different cat. He slept 22/24 hours, wanted affection, no spraying, ate big dinners and cleaned himself until he glowed.

Like a teenager without his peers, Paco is a pussy cat when removed from the cat-gang infested land we call "home".

As to the pool activity -

My Total Immersion swimming is going well. I can swim 45 minutes without much effort. I am trying now to learn how to breathe to my left (I've always only turned to right). This doesn't sound hard, but it is apparently more than simply turning my head to that side. I thrash, I swallow water, I struggle. Last week, I had a breakthrough and was able to breathe left and right during a few laps.

Does anyone know how to keep water out of the ears - other than earplugs? They would be dangerous during an open water swim race.

Hooray for me - and if you are not RIVETED and THRILLED with the time you put into reading this BREAKING NEWS - sorry - no refunds allowed.
Posted by Ann at 5:08 AM 1 comment:

Crowded Mass this morning at St. John Neumann's in Miami - one of several first communion celebrations.

I delightedly watched the sweet eight-year-olds - boys in white ties/shirts, girls in their dresses and veils - carefully processing down the aisle. Clearly, a practiced maneuver. Each pair started after the other was half way down the aisle, bowed at the altar, then separated and walked into a pew row. Anxiously, the teacher observed from the side, and was probably unaware that as each pair walked, then bowed, she was giving empathetic slight bow as well.

Half way through the Mass, a small child hurt herself and began to wail. Mom scooped her up and headed mom-speed (like the wind!) to the back exit and into the cry room. The girl had good lungs. Despite the walls and glass, a faint wail could be heard for the next few minutes. Then quiet. Eventually, mom and child returned to Mass, all smiles.

I started wondering when it was in our emotional development that we stopped crying when we hurt and started cursing instead. As adults, we don't like feeling sad or hurt; it leaves us naked and vulnerable. We chose to get mad - a lot! In retaliation, we shove, complain, swear, cast aspersions, and recklessly gossip .

The world is teeming with animosity. We refuse to let our guard down and be exposed and intimate and loved (or fear the risk of acting in emotionally intimate and loving ways) and we have to cope in some way. It is SO much easier to be angry than hurt or embarressed or betrayed.

What a different world it would be if we retained our three year old willingness just to sit down and wail. We wouldn't hurt others, we wouldn't spread the pain - friendly fellow adults would gather around and pat our backs, offer a drink, a hanky, maybe even a "kiss and make it better".

A person would have time to calm down, blow the nose, get a hug, fix the makeup and get back to the day. Hurt dissipated.

Walking the dog one evening in Clearwater, we passed a man complaining about an incident while grilling dinner. Every other word was the f-word. He used it as a noun, verb, adjective, adverb, and helping verb. He was SO angry, and his diatribe did not seem to relieve his pain. Honestly, he was winding up, rather than down.

I wonder if he would have felt better weeping into his beer, rather than screaming at and into the bottle?

Mockingbirds were serenading the cool sunset, but the f-word man got none of that and all of bitterness.

I'm going to try kleenex over cursing - so, if you catch me weeping in the grocery or as I drive on the lunatic streets of Miami - smile, and bless my efforts for a peaceful pre-school perspective on life, love and loss!
Posted by Ann at 1:40 PM No comments: