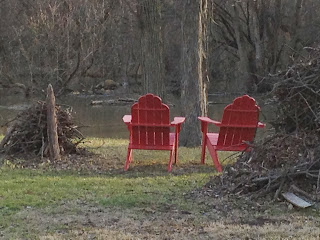 We hope this Christmas season finds you happy and well. Finally, we are in our new home. We love it – the river rippling in the sunlight; the great horned owl hooting in the evening; even the work raking, gardening, and planting. 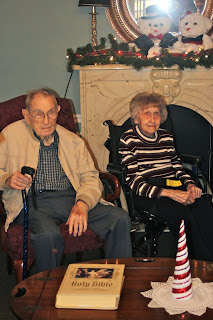 I’ll start with the difficult news. Barry’s father, Cecil, passed away in May. He was a gentle, funny, loving man, a great father and husband. This November, Barry’s mother, Mary Kay, joined Cecil in Heaven. Mary Kay was an amazingly patient and generous mother of five, a woman of faith and grace. We will miss them always. This picture is Christmas, 2012.

After the Ironman, Ann decided to go for a real challenge: she returned to Carmel Catholic faculty, teaching five sections of Church History. 140.6 miles seemed easier at times! Ann visited her Mom once a week and loved planning and planting the new house gardens. Ann struggled with training through winter and the May move, but hit the bike/run/swim hard in summer.

In March, Barry took an early retirement from Mondelez (name of split-off international Kraft Foods). He stayed in Florida to host the kids on Spring Break, then joined Ann up north. Barry registered for Ironman Florida, the Steelhead half-Ironman, and Augusta half-IM. In June, an unfortunate bike crash and collarbone fracture derailed his training. First 6 weeks, no training. Next 6 weeks, limited to riding his road bike on a stationary trainer in the basement. He did this with dedication, up to 3 hours at a time. In August he was cleared to run and swim, so back to Florida. 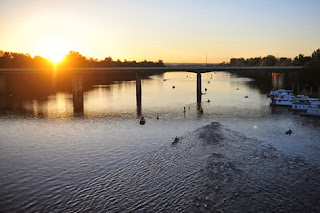 We skipped Steelhead, but went to Augusta. Along the way, we stopped at St. Augustine, St. Simon’s Island, and Savannah. In Savannah, we saw our new grandniece, Charlotte! So sweet.
Barry had a great race, a personal best by 58 minutes; Ann improved her time by 15 minutes. Both enjoyed the push of Savannah River current for fantastic swim times. 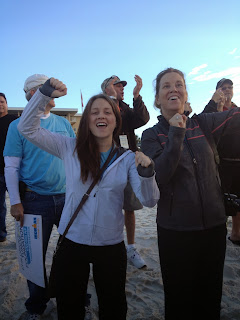 Ann returned to Chicago for a week, visiting her mom and Sherpa-ing for Chris’ Chicago Marathon. Despite his rigorous class Georgia Tech classes, Chris managed to train and broke 4 hours in his third marathon. Kayla and Amy drove up, and Barry checked in via Skype for a celebratory family dinner.

November 2, 2013 found Amy, Ann, and Baker Buddies, Lynn and Mike D’Asta cheering Barry’s Ironman start.
The swim was intimidating with agitated, 10-foot breakers. After an outstanding swim (2.4 mi), he hopped on the bike and we retired to Waffle House for some well-deserved sustenance and rest. His bike (112 miles) was long and blessedly uneventful. 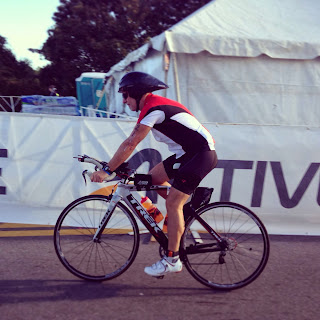 We greeted his return and cheered him onto the run. Barry endured the 26.2 miles and finished an IRONMAN at 15 hours and 10 minutes. We thank all for the wonderful support and encouragement throughout that day and for our fundraising mission, the Boomer Esiason Foundation for Cystic Fibrosis research. 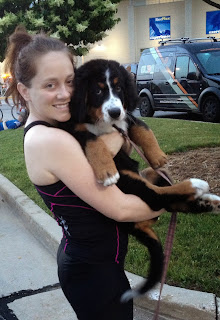 Amy started her second year of dual-language teaching at Dawes elementary in Evanston. She loves her students and work. Amy and her boyfriend Kenny adopted a Bernese Mountain Dog – Karma – who is the same age as Kayla’s Kaner, but will be three times the size. She is a gentle, sweet, playful giant, bounding about our property with joyful abandon. Amy is a cupcake master with such intriguing samples as bacon with maple frosting, pink champagne, and eggnog with spiced rum frosting.
Amy completed her first Sprint and Olympic distance triathlons. 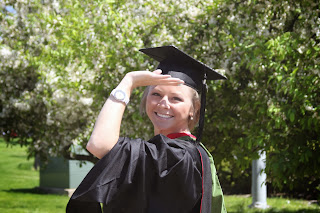 In May, Kayla graduated with her Master’s of Science in Athletic Training. She happily accepted a position with her undergraduate school, Albion College and was assigned football as her first sport. We watch the games on the web and cheer (circumspectly, we don’t want it to seem we like athletic injury) when she runs on the field to care for a player. 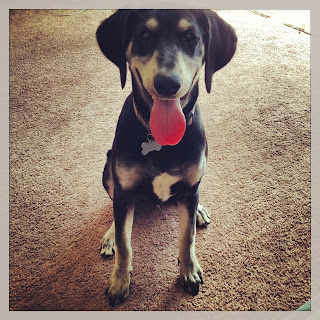 Kayla started a family after graduation – Kaner, a mix-breed Australian Shepherd-hound mix challenges and delights her. Kayla ran her first marathon at Disney in January. 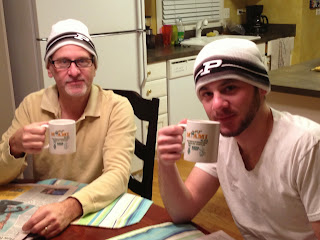 In addition to marathon training and biomedical engineering studies, Christopher enjoys swimming and lifting. He plays piano for the Sunday night Mass. He is constantly on the go, and is even involved in a start-up project for a student-invented medical device.


Our best wishes, prayers, and hopes for you that this year was one of grace and mercy, and that the next be blessed with faith, love, and laughter. May the peace of Christ bring you joy and encouragement each and every day.