Luckily we came to Europe prepared.

We each had an umbrella.

You can forgot your underwear, toothbrush, or (gasp) Rick Steves' guidebook...but do NOT forget your umbrella!

London and Paris were both showery and cool.

The cool weather didn't bother us. In Miami, summer is in full swing - and that means heat and humidity (in case you had no clue as to the origin of the NBA team name!). It was a nice break.

It is easier to walk and tour when not broiling in the hot sun. Today's rain was torrential, so we flipped our plans to an inside venue: The British Museum.

After that visit and future explorations in Paris and Rome, we are left with one conclusion: there is no reason to visit Egypt. Nothing is left. Between the British, French, and ancient Roman emperors, it has all been moved to Europe. 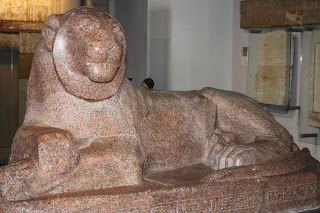 It's fascinating to see the Egyptian sculptures and stone panels. I cannot imagine how these items were transported from Egypt to Britain without damage - they are HUGE! Weighing TONS! Made of STONE! We have moved seven times and always have some breakage. The Mayflower movers of the 18th and 19th centuries knew their packing protocols.

For lunch, we dashed through the rain to the Menier Chocolate Factory joining my high school friend, David Bedella. 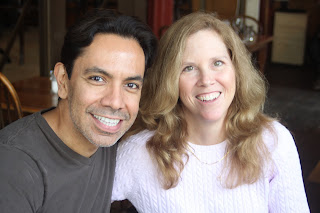 David is an amazing actor currently performing in Road Show a Stephen Sondheim musical. The restaurant is located next to the theatre, and below the rehearsal space. We were able to see the rehearsal set up (up a long narrow flight of stairs, of course!) and other working areas. It was special to see David outside of a class reunion.

To our surprise, the rain stopped! We were able to take the Rick Steves city walk. I am a BIG fan of Rick Steves, especially after this trip. His books are more readable and usable than the usual travel guide fare. This walk began on London Bridge 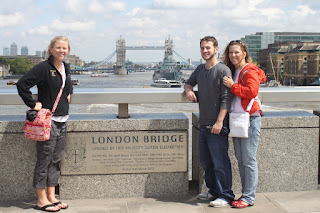 and ended in Covent Garden, where we were mildly entertained by a street performer who escaped from a cellophane body wrap.

We decided to take a bus from Covent Garden to Harrod's. Harrod's is a large, famous department store in London. Its famous motif?

I was surprised by the large food counters selling speciality items of candy, caviar, duck, and other such gourmet fare. We took the...stairs!...no, they had ESCALATORS!...up to see the Princess Diana and Dodi al Fayed Memorial. The Fayed family owns Harrod's.

Back in Kensington, we stopped for our requisite tourist dinner experience: Fish and Chips! Chris is legal in Europe, so here he is enjoying his first pint (or so we believe!) 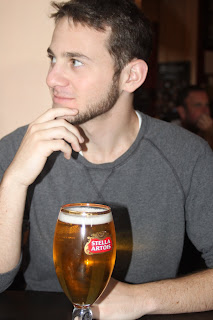 I haven't had that much fried food in a while, but it was deliciously, greasily decadent.

I figure the Stairmaster Tube and Tour experience will take care of the calories, no problem!
Posted by Ann at 5:52 AM No comments:

To celebrate, we decided on a trip to Europe - and Kayla and Chris were able to come with us, an added bonus.

Amy (our 25 year old) is traveling through Europe on her own for a month. She's staying with friends, in hostels, and joining up with her cousin Serena for part of the journey.

On our first day in London, we learned two important interconnected facts.

The first: London is old.

Much older than the United States, if you can believe it. The roads are narrow, the buildings are tightly packed, and theyoften have year markers dating back for hundreds of years. The age thing is amazing. You are walking, driving, and spitting (not me, the other ugly American tourist) where people have done similar such things for centuries. 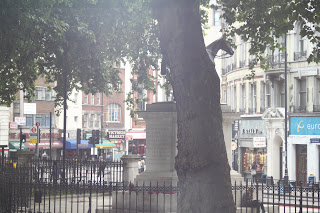 Second: London (and Paris and Rome) are old, and as such require something different than touring America...

This is NOT a vacation for the couch potato.

Due to the narrow streets, most citizens use public transportation. The system is easy to use with reasonable costs. We planned (and did) use public transportation in all cities except for one airport taxi ride. After viewing London drivers from the relative safety of our double decker bus (the driver moved that bus like it was a smart car - cutting in, cutting out, honking...it was CRAZY), we would STRONGLY recommend public transportation or taxis. London is bursting with taxis. The taxi drivers train for two years by riding a bicycle with clipboard/maps attached, memorizing routes in and around the city. Until they know all those routes, they cannot be certified as a taxi driver.

As a family of four with one child still to be put through college, we opted not to use taxis. I studied each metro service, and had transportation plans from arrival to departure.

In Heathrow, we cheerfully made our way to the well-marked Tube station.

The escalator up to the platform (40 stairs?) was broken.

Still cheery and full of first day optimism, we each hauled our 35 pound suitcase up to the train. Unbeknownst to us, the non-functioning escalator was a sign of things to come (more specifically, stairs to come!)(and come)(and come).

There is a reason you do not see many overweight people in cities dependent on mass transit. At least old cities. Stairs are de rigueur. While I am sure they must have some handicap arrangements, we did not often see options other than stairs, and saw several people with crutches negotiating the ups and downs of the multiple staircases that marked crossing lines within a station.

Kayla and I have been doing the "Insanity" exercise program this summer, which consists mostly of various ways of squatting, lunging, and jumping. I am still running 3 - 5 miles three times/week. 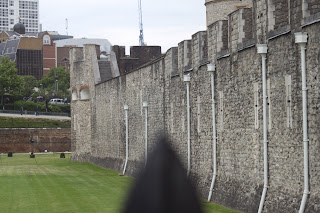 I was exhausted. Between the tube station stairs and the museum stairs, my legs were screaming for mercy. The Tower of London should read "towerS" with nice medieval staircases up and around and down (don't miss the Tower - one stands in history. It is an amazing feeling).

All in all, in each of our three city tour (London, Paris, Rome), we dragged those stinking suitcases up and down a crazy number of stairs. Then our daily activities took us in and out of museums, churches, historical sites, and the cities' metro stations - all with multiple staircases and long, long walks. 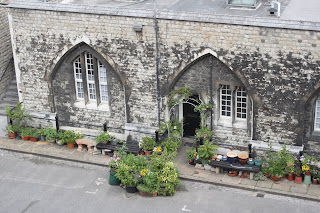 Thus began our great adventure - we loved almost every minute...and I will share most of them with you!;)
Posted by Ann at 4:39 AM 1 comment: