Josh picked us up bright and early, none of us felt like much breakfast after the late dinner yesterday. We went over to Denali and hopped a bus to the sled dog kennels!

Denali still has working dogs; often the dogs can move heavy items across the snow much better than vehicles. They love to work, they are bred to work. The AKC doesn't recognize the Alaskan husky as a breed because there isn't any uniformity of color or form - they chose each year's litter for smarts and temperament and strength.

All the dogs received their morning kibble in Kongs or other slow feed devices - they had to work to get the food out. Beautiful animals. After the demo started, the ranger told us the dogs work until they are 9 years old! When she asked us to clap, a cacophony of barks erupted - "pick me! pick me!" Click here for a video  The middle dog you see jumping up and down like a spring was ignominiously escorted off after the run...the walk of shame. He is only 10 months old, youthful enthusiasm overruled training.

Josh took us to the train station for our wonderful return to Anchorage via the Alaska Railroad. We were in a dome car, so could see eagles fly overhead and all the scenery. In the back, was an open deck for viewing/photography without glare of windows. We were served two very good meals during the 8 hour journey. Young tour interns pointed out items of interest and then...

SHE REVEALED HERSELF in ALL her GLORY.

Only 30% of summer visitors to Denali see Mt. Denali. Clouds often obscure the peak due to wind patterns around the heights.  TAH DAH!!

Said goodbye to Lisa in Anchorage...she was headed right to the airport. We hiked over to our Marriott hotel, which seemed so...so hotel-ish after our stays in the lodge rooms. Time to rest up! 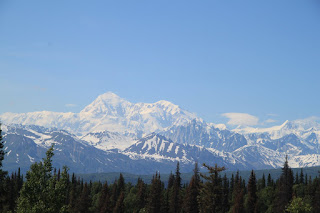 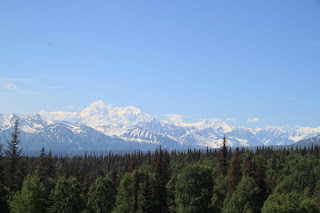